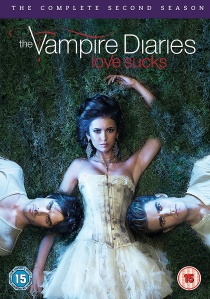 Unending suspense, undying romance. The second chapter in the story of two sexy vampire brothers obsessed with the same beautiful girl comes to home video on 22nd August 2011, as Warner Home Video releases The Vampire Diaries: The Complete Second Season on DVD and Blu-ray. The Vampire Diaries: The Complete Second Season contains 22 one-hour episodes plus over an hour of bonus features, including three brand-new Featurettes, Deleted Scenes, a Gag Reel and Creators' Commentaries.

They're back - and they're not alone. In Season 2, Elena, Stefan, Damon and the other residents of Mystic Falls are joined by a sinister new breed. Released from the tomb, Katherine unleashes her personal brand of evil in a diabolical plot. The Originals - the world's oldest and most dangerous vampires - hunt for Elena, who discovers she has a terrifying connection to their world. And now vampires aren't the only monsters in town. On moonlit nights, werewolves roam in search of victims... including vampires, who succumb to a single werewolf bite.

DVD
Released on DVD 4th April 2022 from BBC Worldwide, Golden Globe, Emmy and BAFTA winner Ben Whishaw stars in This Is Going To Hurt, Adam Kay's adaptation of his best-selling memoir about life as a junior doctor. END_OF_DOCUMENT_TOKEN_TO_BE_REPLACED
Top PicksView