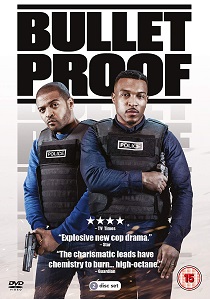 Giving a fresh spin on the classic cop-buddy genre, this brand new drama is a game changer. Loaded with high-octane action, sharp humour and a lot of fun, Bulletproof crashes on to DVD 23rd July 2018.

Bishop (Clarke) and Pike (Walters) are the tenacious dynamic duo; cool, whip-smart, unapologetically street-wise and tough. Pike is the stable half of the two, a family man from a good background, charming and widely admired. Bishop on the other hand, is unpredictable, full of fire and a walking time bomb. Together they chase down hardened criminals in London's East End, facing life-and-death situations that test not only their abilities but the strength of their bond.

This stylish, witty, gritty drama is filled with a riveting new case in each episode, which feed into a bigger series long mystery. As Bishop and Pike track down a notorious criminal who has returned to the area, nothing can prepare them for how close to home the case is about to hit.

Strap in for an adrenalin-fuelled ride though the mean streets of London.