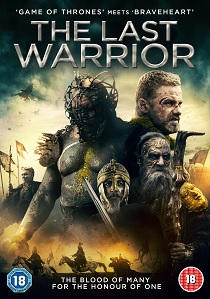 Prepare for battle with action-packed, Russian epic fantasy The Last Warrior, charges on to DVD from 4Digital Media through Sony Pictures Home Entertainment.

Described as 'Game of Thrones meets Braveheart' this violence-fuelled clash of the clans, sees fearless warriors fight to the death in a bid to save their tribe from extinction. With mind-blowing battle scenes, a shocking body count and blood and guts galore, The Last Warrior is not for the faint hearted.

A new era is about to begin in Eastern Europe. Scythians, the proud warriors, have almost been wiped out and most of the remaining few descendants have become ruthless mercenary assassins.

Lutobor, a brave and fearsome warrior becomes embroiled in brutal conflict with another tribe. When his wife and son are snatched he must venture on a perilous journey, risking life and limb to save his family. Taking his enemy, a captive Scythian, along as his guide - they brave the treacherous wilds, moving toward the last haven of the Scythians - to what seems to be their inevitable demise. Who will prevail in this epic fight for survival?

The Last Warrior arrives on DVD in its original Russian version with English subtitles and includes a dubbed English language version, on 20th August 2018.