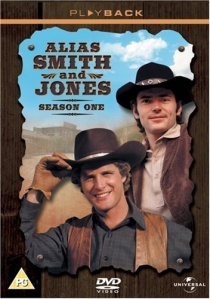 Universal Playback is delighted to announce the release of the rootin' tootin', rip roaring, gun slinging cult TV classic Alias Smith and Jones. The hugely popular series was originally screened in the 1970s and attracted a legion of avid viewers. The complete first season will be released for the first time ever on DVD from 11th June 2007 and stars cult hero Pete Duel (Gidget, How to Steal an Airplane), as Hannibal Heyes and Ben Murphy (Murder She Wrote, JAG) as Kid Curry.

"Cunning" Hannibal Heyes and "Gunning" Kid Curry are two of the most successful outlaw cowboys of the old West. Despite this the duo decide that it's time to give up their old criminal lifestyle and go straight. The only problem is their old enemy the governor won't grant them amnesty straight away; they have to prove they deserve it, all the while being hunted by everyone from sheriffs, bounty hunters and ordinary people.

Written by Douglas Heyes (The Virginian, Colt.45) and Glen A. Larson (Magnum PI, Battlestar Gallactica), the series contains humour, drama and western gunfights as Heyes and The Kid battle to evade chases aided by the beautiful and energetic Clementine Hale played by Sally Field (The Flying Nun, Gidget), who has no qualms in blackmailing the two when she needs to.