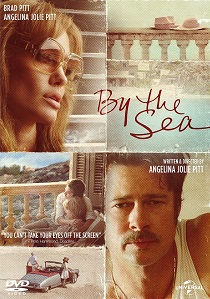 Brad Pitt and Angelina Jolie Pitt share the screen for the first time since 2005's Mr. and Mrs. Smith in By the Sea, a sumptuous and sensitive portrait of marital crisis coming to Blu-ray and DVD on 20th June 2016 from Universal Pictures (UK). Written, directed and produced by Academy Award®-winner Jolie Pitt, By the Sea is a lavishly photographed, emotionally ambitious undertaking that inspired Timeout New York to declare "Jolie has evolved into a serious filmmaker."

With an international supporting cast including Mélanie Laurent (Inglourious Basterds, Now You See Me), Melvil Poupaud (Laurence Anyways, The Lady in the Portrait), three-time César Award-winner Niels Arestrup (The Diving Bell and the Butterfly, The French Minister) and two-time César-winner Richard Bohringer (The Cook, the Thief, His Wife & Her Lover, Le grand chemin), By the Sea follows a long-term marriage's ebb and flow through a crisis that could determine its future.

Written, directed and produced by Academy Award® winner Angelina Jolie Pitt, By the Sea follows an American writer named Roland (Brad Pitt) and his wife, Vanessa (Angelina Jolie Pitt), who arrive in a tranquil and picturesque seaside resort in 1970s France, their marriage in apparent crisis. As they spend time with fellow travelers, including young newlyweds and village locals, the couple begins to come to terms with unresolved issues in their own lives. Praised as "personal and daring" by The New Yorker, By the Sea is an intimate, provocative and often disquieting look at love.

3D-BD
The surviving members of the resistance face the First Order once again, and the legendary conflict between the Jedi and the Sith reaches its peak as Star Wars: The Rise of Skywalker is released on ... END_OF_DOCUMENT_TOKEN_TO_BE_REPLACED
Hot PicksView