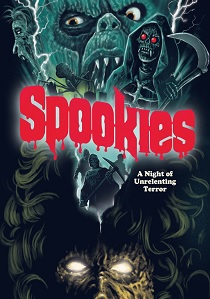 The chaotic and deranged result has gone on to amass an army of devotees in the intervening years, attaining genuine cult status among horror fans. Among the additional content is a new version of feature-length documentary VIPCO: The Untold Story.

After their car breaks down, a group of travelers find themselves stranded in a remote part of New England. After taking shelter in a spooky old mansion, complete with a graveyard, they discover a ouija board and decide to spend the night attempting to summon some spirits. But the group soon learns that playing with the forces of black magic isn't fun and games, and it's not long before they're head-to-head with all sorts of demonic creatures, shape shifters, and other forms of evil, all of whom are more than happy to pick them off in the most gruesome of ways.