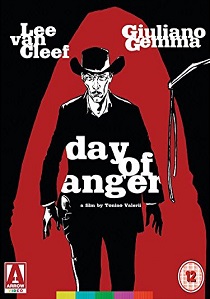 Arrow Video is excited to announce the Blu-ray release of Tonino Valerii's Spaghetti Western Day of Anger [I Giorni dell'ira, aka Gunlaw] starring genre icons Lee Van Cleef and Giuliano Gemma. This exclusive Blu-ray will be made available from 31st March 2015.

Featuring a brand new restoration from the original 35mm Techniscope camera negative, this release presents both versions of the film - the original 114-minute cut that opened in Italy (with English or Italian soundtracks) and the more familiar 86-minute version that was released internationally (in English).

Coming loaded with extra features, the disc will also include brand new interviews with screenwriter Ernesto Gastaldi and Tonino Valerii's biographer Roberto Curti, plus a previously unreleased 2008 interview with Valerii himself, and a scene that was deleted from the longer cut of the film before being reinstated in the shorter version. The disc will also feature a reversible sleeve featuring original and newly commissioned artwork by Reinhard Kleist. The enclosed booklet features new writing on the film, its stars and locations by spaghetti western expert Howard Hughes, illustrated with original poster images.

When Sergio Leone turned Lee Van Cleef into a major star with For a Few Dollars More and The Good, the Bad and the Ugly, the actor sensibly stayed in Italy to make several more spaghetti westerns, including this one from Leone's former assistant Tonino Valerii that genre aficionados rank amongst the best ever made.

Giuliano Gemma plays street cleaner Scott Mary, relentlessly bullied by the people of the small town of Clifton. When legendarily ruthless master gunfighter Frank Talby (Van Cleef) rides into town, Scott seizes the opportunity to lift himself out of the gutter, and possibly even surpass Talby's own skills. But what is Talby doing in Clifton in the first place?

This lively, intelligent western, notable for the chemistry between its charismatic leads, some memorable action set-pieces (including a rifle duel on horseback that has to be seen to be believed), and a jazzy Riz Ortolani score, is presented here in an exclusive high-definition restoration from the original Techniscope negative.