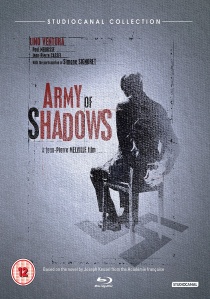 StudioCanal are pleased to announce their latest release as part of their Studiocanal Collection, which aims to revisit some of the most iconic films from StudioCanal's back catalogue of over 5,000 titles.

Bringing together the very best of cinema, the Studiocanal Collection is a series of acclaimed and influential films on Blu-ray with unique special features and accompanying booklets, available in HD so as to present the best possible picture and sound quality. Discover or re-discover great classics, iconic contemporary works or adaptations from literary masterpieces.

Atmospheric and gripping, Army Of Shadows is renowned director Jean-Pierre Melville's most personal film, featuring Lino Ventura, Paul Meurisse, Jean-Pierre Cassel and Simone Signoret, as intrepid underground fighters who must grapple with their own brand of honour in their battle against Hitler's regime. Focusing on a group of resisters, the film explores the moral dilemmas of loyalty and betrayal, heroism and compromise amongst Melville's signature minimalist, yet riveting style.

Faithfully adapted from author Joseph Kessel's novel of the same name, who was a member of the French Resistance, combined with Melville's own experiences, Army Of Shadows is noted for playing true to its title by its sombre tones, intensified by its stars' solid performances.

The controversial French resistance epic originally released in 1969 when the director was a considerable presence in French cinema, the film was heavily criticised upon its release in France for its particular form of glorification of the Resistance. At the time, it appeared to be running against the tide of history, as attitudes to the war were about to take a U-turn, with a nation split between collaborationists and resisters.

American film-programmers took their cue from the French critics and on this basis, decided not to give it a US release. It was not until over 35 years later in 2006, that it was finally released in the US and was granted its due acclaim, including winning the New York Film Critics Circle Award for Best Foreign Language Film.

Following his films, Le Silence de la mer/The silence of the sea (1949) and Léon Morin, prêtre/Leon Morin, priest (1961), Melville completed his triptych about the German occupation of France and the Resistance. Melville told Paris-Presse newspaper, "Now I have said everything about the war".

Marking its restoration available on blu-ray for the first time, the disc also includes a brand new one hour documentary extra 'Army of Shadows - The Hidden Side of the Story.' Army Of Shadows will be released on Blu-Ray on 8th April 2013.

DVD
After more than thirty years of service as one of the Navy's top aviators, Pete 'Maverick' Mitchell is back where he belongs as Top Gun: Maverick flies onto DVD, Blu-ray and 4K UHD 31st October 2022 from Paramount Home ... END_OF_DOCUMENT_TOKEN_TO_BE_REPLACED
Top PicksView