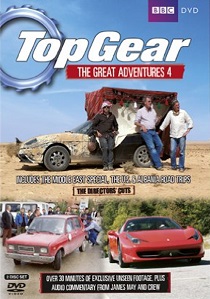 NewsTV SeriesSpecial Interest
News Article Go back to homepage
The boys are back with even more exhilarating and daring road trips as they create the ultimate test of man against machine when Top Gear: The Great Adventures 4 comes racing onto DVD and Blu-ray from 28th March 2011 from 2entertain.
James May, Jeremy Clarkson, Richard Hammond
Richard Heeley, Nigel Simpkiss, Phil Churchward, Brian Klein
Grant Wardrop, Oisin Tymon, Alex Renton, Andy Wilman
2entertain
4 hours 12 minutes
28/03/2011
Thank you for supporting DVD365.net when you order using the link(s) below. As an Amazon Associate we earn from qualifying purchases
Buy DVD
Buy BD
Information

The boys are back with even more exhilarating and daring road trips as they create the ultimate test of man against machine. This bumper packed DVD, featuring over 25 minutes of exclusive unseen footage, unites some of Top Gears most recent adventures as the boys embark on more ill-advised attempts to out-do each other.

The Top Gear boys are once again let loose in the USA. Jeremy Clarkson, Richard Hammond and James May compare the Mercedes SLS, the Porsche 911 GT3 RS and the Ferrari 458 Italia in an epic road trip up America's east coast. En route, they undertake a series of challenges culminating in a fight to find the fastest way into New York, all in the name of crowning the world's greatest sports car.

The three wise men of Top Gear embark on a seasonal road trip as they attempt to recreate a certain famous journey across the Middle East to Bethlehem.

They do so in a trio of open top sports cars, each wholly unsuited to the conflict ridden mountains of southern Turkey, the dangerous warzones of Iraq and the searing deserts of Syria. Along the way they test the limits of mechanical and physical endurance as well as asking the vital question, what exactly is myrrh and where do you buy it?

As well as featuring almost an additional 10 minutes of this special, the DVD includes an exclusive commentary with James May and the crew.

HotBDUHD
Sweeping the 60th Academy Awards and winning nine Oscars including Best Picture and Best Director, The Last Emperor arrives on Blu-ray and 4K UHD 13th February 2023 from Arrow Films in a brand new 4K restoration that will take your breath away. END_OF_DOCUMENT_TOKEN_TO_BE_REPLACED
Top PicksView