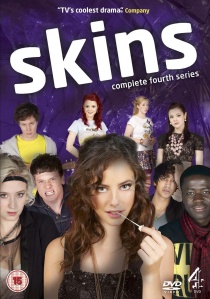 The critically-acclaimed and multi BAFTA award-winning drama, Skins, returns for a fourth series available to own on DVD from 22nd March 2010, with the Series 1-4 Box Set released on the same date by 4DVD.

The Skins gang is back at College after the summer break. Their hedonism knows no bounds as they live life to the ethos of no consequences, no tomorrow and you can all live forever. Their care-free bubble abruptly bursts when a near-stranger needlessly dies, sending a shockwave through the entire group. The tragedy leaves Thomas (Merveille Lukeba) questioning everything - his faith, his family and even his choice of friends. The reverberations will reach far beyond Thomas's story, affecting the lives of all those we know around him.

Effy (Kaya Scodelario) returns - no longer with her queen-bee status, and still struggling to deal with her family issues. Her best friend, Pandora (Lisa Backwell), is back adorable and kooky as ever. Twins Katie (Megan Prescott) and Emily (Kathryn Prescott) are visibly different - after leaving her sister's shadow Emily is head over heels in love, but while she's finding out what life is really like, Katie is left behind in a family meltdown.

Naomi (Lily Loveless) seems to have more to hide this series; while JJ (Ollie Barbieri) finally realises what love is. Meanwhile Cook (Jack O'Connell) is trying to simultaneously exorcise his demons and not reveal his weaknesses, and Freddie (Luke Pasqualino) finds out that love can lead you to the edge of sanity.

The eight new episodes are written by a young British writing team, and are headed up by Executive Producer Bryan Elsley, Producer John Griffin and series directors Neil Biswas, Daniel O'Hara, Phillippa Langdale, and Esther May Campbell. The series 4 DVD is packed with extra features including bonus Skins stories, an animated feature, behind the scenes videos, and commentaries with the writers and directors.

DVD
When the world is locked down, they'll find their ticket out in Locked Down, released on DVD 7th June 2021 from Warner Home Video. END_OF_DOCUMENT_TOKEN_TO_BE_REPLACED
Top PicksView