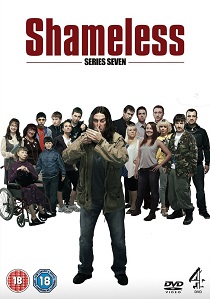 News
News Article Go back to homepage
The Gallaghers, The Maguires and the rest of the unruly, roguish residents of The Chatsworth Estate have once again opened their doors to the public, as the multi-award-winning and 2009 BAFTA nominated Shameless: Series 7 is available from 17th May 2010 from 4DVD.
Elliott Tittensor, Tina Malone, Nicky Evans, Alice Barry, Rebecca Atkinson, David Threlfall
Dearbhla Walsh, Lawrence Till, David Threlfall, Paul Walker
Jean Holdsworth, Charles Pattinson, George Faber, Paul Abbott
4DVD
16 hours 0 minutes
17/05/2010
Thank you for supporting DVD365.net when you order using the link(s) below. As an Amazon Associate we earn from qualifying purchases
Buy DVD
Information

The Gallaghers, The Maguires and the rest of the unruly, roguish residents of The Chatsworth Estate have once again opened their doors to the public, as the multi-award-winning and 2009 BAFTA nominated Shameless: Series 7 and Series 1-7 Box Sex is available from 17th May 2010 from 4DVD.

The 16 part series sees the welcome return of the charmingly chaotic families and their outrageous activities in and around the Manchester estate that they call home. Scams, sex and a few new arrivals add to the outlandish mix of characters, domestic life will never be the same again.

Frank Gallagher (David Threlfall) begins a fervent romance with local Librarian Libby, played by Shameless newcomer Pauline McLynn (Father Ted, Jam & Jerusalem). Libby's passion for romantic literature wakes in Frank something that has been dormant for so long - before her mum Patty (Valerie Lilley - The Catherine Tate Show) arrives and threatens to put a spanner in the works.

Eight months on from the tragic loss of Mandy, the Maguire family are preparing to welcome a new addition to the clan, a baby son for Karen (Rebecca Atkinson) and Jamie Maguire (Aaron McCusker). But baby Connor's arrival doesn't mean Joe Pritchard (Ben Batt) will loosen his hold on Karen, who soon discovers that motherhood brings on some unwanted Jackson family traits. The Jockey's got a new landlady - Mimi Maguire (Tina Malone) so Patrick (Sean Gilder) has to come to terms with their separate living arrangements. While Kelly (Sally Carman) takes her new godparent duties to the extreme, boyfriend Shane Maguire (Nicky Evans) gets involved with wedding scams - before thinking about a wedding of his own.

Micky Maguire (Ciaran Griffiths) and Ian Gallagher (Gerard Kearns) now share a bungalow together, residing as the perfect odd couple. Meanwhile over at the Gallagher's, Liam (Johnny Bennett) hits senior school, where it doesn't take long to develop his first crush. Carl (Elliott Tittensor) and girlfriend Maxine (Joanna Higson), long past that stage of innocence, start getting adventurous in the bedroom. The unique, barmy world of Shameless has returned.

Producer Lawrence Till says: "We are thrilled that the acting talents of Pauline McLynn and Valerie Lilley are to be joining our already celebrated cast on the Chatsworth Estate. This season we have continued to push the boundaries of storytelling: keeping the audience on the edge from the first frame to the last blast."

The Series 1 - 7 Box Set includes all seven series, including all of the special features of each individual series' DVD release.

DVD
An expert cutter must outwit a dangerous group of mobsters in order to survive a fateful night in The Outfit, released 1st August 2022 on DVD, Blu-ray and 4K UHD from Dazzler Media. END_OF_DOCUMENT_TOKEN_TO_BE_REPLACED
Top PicksView