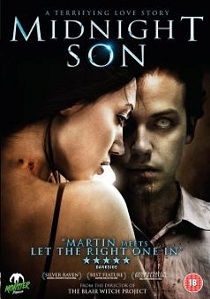 In Midnight Son, released on DVD by Monster Pictures on 11th February 2013, a terrifying love story sees a young man's thirst for human blood threaten to destroy his relationship with the woman he loves.

From the director of The Blair Witch Project, Midnight Son is the story of Jacob (Zak Kilberg, Zombie Strippers!, Lincoln Heights), a young man confined to a life of isolation, due to a rare skin disorder that prevents him from being exposed to sunlight. His world opens up when he meets Mary (Maya Parish, How I Met Your Mother) , a local bartender and falls in love. Tragically, Jacob's actions become increasingly bizarre as he struggles to cope with the effects of his worsening condition.

Forced by the disease to drink human blood for sustenance, he must control his increasingly violent tendencies as local law enforcement narrow their focus on him as a suspect in a series of grisly murders.

Directed by Scott Leberecht, a well-known name on the festival circuit, Midnight Son is a twisting, terrifying tale of vampirism and humanity and how the two conditions can intertwine. Having wowed audiences when it received its UK premiere at Frightfest, the film was recently screened to a packed audience at Horrorthon in Dublin.