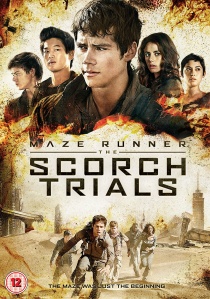 The Maze was just the beginning. After the harrowing adventure of escaping the maze, the Gladers find themselves right in the center of an epic mystery in Maze Runner: The Scorch Trials, available on Blu-ray and DVD from 1st February 2016, courtesy of Twentieth Century Fox Home Entertainment. Mysteries deepen and stakes are raised as the Gladers must survive The Scorch in this bigger, even more suspenseful and action-packed chapter of the Maze Runner phenomenon.

The critically acclaimed young-adult saga based on author James Dashner's best-selling book series has taken the world by storm thanks to its remarkable young cast led by director Wes Ball, including Dylan O'Brien (Teen Wolf), Thomas Brodie-Sangster (Game of Thrones), Ki Hong Lee (The Unbreakable Kimmie Shmidt) and Kaya Scodelario (Skins). Based on the second book in a trilogy by James Dashner, the series sold more than nine million copies in all formats.

There's more action, more excitement and more spectacular effects in this thrilling new chapter of the epic Maze Runner saga that's taken the world by storm! They may have escaped from the Maze, but Thomas (Dylan O'Brien) and his fellow Gladers now face a greater challenge: searching for clues about the secret organization known as WCKD. Their journey leads them to the Scorch, a desolate wasteland filled with unimaginable dangers. The mystery deepens at every turn as the Gladers work together to discover their purpose and battle to survive in this must-see, electrifying adventure!

Real Gladers are in line for the greatest of presents this winter, as the Maze Runner: The Scorch Trials on Blu-ray includes two hours of thrilling bonus content, including deleted and extended scenes will take fans further behind-the-scenes of the suspense and action-packed journey through the Scorch.

Teens will be delighted to find a gag reel that reveals fun, silly moments on set with their favourite cast members including Dylan O'Brien. They'll also need to make sure to check out Janson's Report, a perfect bridge from the film that's full of debriefing videos with Janson, Thomas, Newt, Minho, Frypan and Aris after they arrive at the compound. This version is the must have for fans of the franchise and any members of the Dashner Army. Both the Blu-ray and DVD will include an offer for the Maze Runner mobile game with a free Brenda runner plus in-game currency.