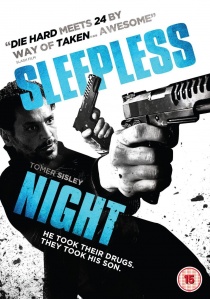 Vincent (Tomer Sisley) is a cop with connections a vicious criminal underworld. He and his partner steal a batch of cocaine from a powerful drug baron, but Vincent is identified in the heist. The gangsters kidnap Vincent's son to hold him hostage until he returns their stolen goods, but he no longer has them.

Sleepless Night is a feverish action movie with a twist: all the action takes place in a nightclub in the space of one hectic, breathless night. Wounded from the heist and losing blood, Vincent must battle his way through the maze-like club, with danger at every turn and overcome impossible odds to save his son.