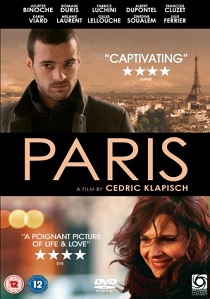 News
News Article Go back to homepage
A story of a Parisian, Pierre, who is sick and thinks he may die, from the director of The Russian Dolls, Cédric Klapisch, Paris is released on DVD by Optimum World on 2nd February 2009.
Albert Dupontel, Karin Viard, Mélanie Laurent, Joffrey Platel, Romain Duris, Fabrice Luchini
Cédric Klapisch
Cédric Klapisch, Bruno Levy, Jean-David Lefebvre, Monte Christo
Optimum World
2 hours 10 minutes
02/02/2009
Thank you for supporting DVD365.net when you order using the link(s) below. As an Amazon Associate we earn from qualifying purchases
Buy DVD
Information

From the director of The Russian Dolls, Paris is released on DVD by Optimum World on 2nd February 2009. This is the story of a Parisian: Pierre (Romain Duris) who is sick and thinks he may die.

His condition makes him look at all the people he meets in a new and different way. Imagining his death suddenly gives new meaning to his life, to other peoples' lives, and to the life of the whole city. Fruit and vegetable sellers, a woman who runs a bakery, a social worker, a dancer, an architect, a homeless person, a university professor, a model, an illegal immigrant from Cameroon, and especially his sister Élise (Juliette Binoche)...

All these very different people come together in acclaimed director Cedric Kaplisch's Paris.