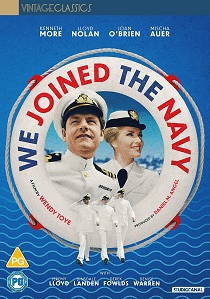 Lieutenant Commander Robert Badger is an excellent naval officer with one major problem. He speaks the truth at the most inopportune times, leading him to be transferred from ship, to shore, and then to instruct at the Royal Naval College. When his remarks are repeated by one of his students to his father, an anti-military Member of Parliament, he has one last chance to prove himself.

We Joined The Navy is released on DVD and Blu-ray 21st November 2022 from StudioCanal as part of their Vintage Classics collection.

DVD
The end of the line is only the beginning in a wild, non-stop thrill ride through modern-day Japan as Bullet Train is released on DVD, Blu-ray and 4K UHD 24th October 2022 from Sony Pictures Home Entertainment END_OF_DOCUMENT_TOKEN_TO_BE_REPLACED
Top PicksView