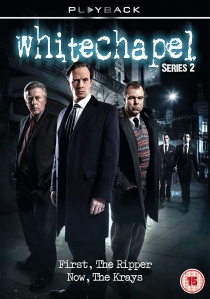 Get ready to crack the clues of another copycat villain with the release of top ITV drama, Whitechapel: Series Two, available from 1st November 2010 courtesy of Universal Playback.

Rupert Penry-Jones (DI Joseph Chandler), Phil Davis (DS Ray Miles) and Steve Pemberton (Edward Buchan) are back for the second series of Whitechapel. After intercepting the last 'Ripper' murder, another copycat killer has slunk out from the darkness. Whitechapel: Series Two sees the crime fighting trio trying to solve murders similar to those of the infamous Kray Twins.

Armed robberies, arson, torture and murder are to name a few of the notorious crimes that the Kray Twins committed. After several attempts by the filth the twins were finally imprisoned in 1968 after over ten years on the rampage. Will Chandler, Miles and Pemberton be able to catch the copy cat killers in time? You'll have to watch to find out.

Featuring exclusive deleted scenes and exciting features that take a look at both the iconography and style of the infamous Kray Twins, Whitechapel: Series 2 is a clever blend of clues, fast action chases and dramatic twists. Get ready for the TV series that will leave you guessing!