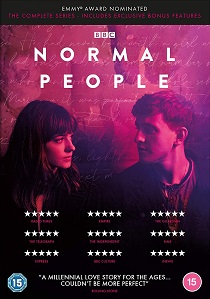 An exquisite and compulsive modern love story about how two people profoundly impact each other's lives, Normal People tracks the tender but complicated relationship of Marianne (Daisy Edgar-Jones) and Connell (Paul Mescal) from the end of their school days in a small west of Ireland town to their undergraduate years at Trinity College Dublin.

This critically acclaimed 12 part series explores just how complicated intimacy and young love can be.