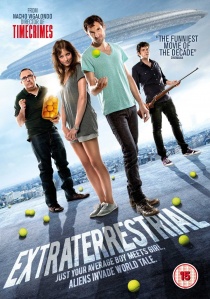 When Julio (Julián Villagrán; Under The Stars) wakes up in a strange apartment after a night of partying, he's pleasantly surprised to discover it belongs to a beautiful one-night-stand he can't remember - Julia (Michelle Jenner; Paco's Men). What's already an awkward situation is made even more so when they discover a giant flying saucer hovering above the city, which is now deserted.

Now Julio must contend with a jealous ex-boyfriend, an eccentric neighbour - and very possibly the end of the world!