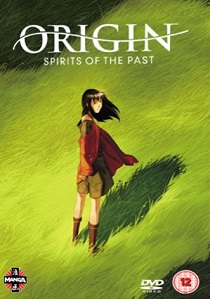 Nominated for the Best Film prize in the feature section of the prestigious Annual Annecy International Animation Film Festival and regarded by SciFi.com as "almost painfully beautiful", the futuristic sci-fi eco-adventure Origin: Spirits Of The Past comes to DVD on 25th August 2008 from Manga Entertainment as both a single disc and a special two-disc edition, the latter available exclusively from HMV.

Directed by Keiichi Sugiyama (Neon Genesis Evangelion) and boasting a visually style that recalls the work of award-winning animation wizard, Hayao Miyazaki (Howl's Moving Castle; Spirited Away), Origin: Spirits Of The Past is the first full-length animated feature film made by Studio Gonzo, the Japanese anime studio responsible for the likes of Final Fantasy: Unlimited, Hellsing and She, The Ultimate Weapon.

Three hundred years have passed since mankind's interference with the environment inadvertently gave birth to a sentient Forest and left the developed Earth in ruins, with the remnants of humankind divided as never before. While half chose to seek a tenuous coexistence with the Forest, the others sought to dominate and subdue those forces they did not understand. Now, Agito, the young son of an aging hero, is about to set in motion a further series of catastrophic events that could result in the destruction of all that is left of the world of man.

Following a bout of youthful horseplay that leaves him lost in a forbidden area of the Forest, Agito stumbles across a cryogenic stasis tube containing a young girl. Reviving the girl from her artificial slumber, he discovers her name is Toola and that she has been sent from the past entrusted with a vital mission. Unable to come to terms with the present state of the planet, Toola calls upon ancient technology in an attempt to reshape the future from the ashes of the past. But her ideological convictions put her at odds with Agito and the new friends quickly find themselves on opposite sides of a potentially calamitous conflict. With the blessing of the Forest, Agito sets out to save Toola from herself and, in doing so, to give hope to what is left of mankind. Only by searching their souls and examining the past will Agito and Toola be able to understand the origin of all things and finally unite mankind with the Forest.

With its beautiful visuals and a fluid mix of 3-D CGI and traditional 2-D animation styles, Origin: Spirits Of The Past is an eye-popping fantasy adventure with a compelling and topical environmental message that is sure to appeal to fans of similar superlative animated features such as Princess Mononoke and Nausicaa: Valley Of The Wind.