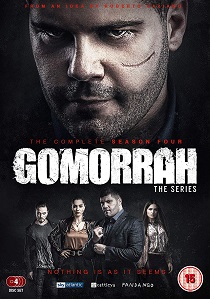 Genny is left to face a Naples once again on the brink of fighting and bloodshed. With Sangue Blu taking back his grandfather s kingdom and the Capaccio crew making their moves on the Secondigliano turf, Genny's sole remaining option is to bring in a new player: the Levante family. For a while, their involvement gives Genny a newfound balance on the map of gangland power, and as he starts to shed his old criminal past behind, he dreams of setting up a life for his son entirely different to the one his father left him.

But it's never as easy as it seems to get away from your roots. As the truce between the crime families becomes increasingly frail, Genny is about to learn why his father decided to keep the Levante family out of North Naples, and to find out just how fragile a newfound balance of power can be.

The fourth season of the hit Italian crime drama Gomorrah is released on DVD and Blu-ray 29th July 2019 from Arrow TV.