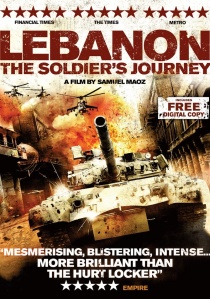 News
News Article Go back to homepage
In June 1982, a 20-year-old Israeli tank gunner called Samuel Maoz killed a man for the first time in his life. Twenty five years later the same Samuel Maoz wrote and then went on to direct Lebanon, a film based on his horrific experiences inside that tank in 1982.
Dudu Tassa, Zohar Shtrauss, Michael Moshonov, Oshri Cohen, Itay Tiran, Yoav Donat
Samuel Maoz
Moshe Edery, Leon Edery, Rémi Burah, Anat Bikel
Metrodome
1 hour 33 minutes
28/08/2010
Thank you for supporting DVD365.net when you order using the link(s) below. As an Amazon Associate we earn from qualifying purchases
Buy DVD
Information

In June 1982, a 20-year-old Israeli tank gunner called Samuel Maoz killed a man for the first time in his life. It was the start of the first Lebanon War and what was to follow left the young man deeply scarred emotionally long after the war had ended. Twenty five years later the same Samuel Maoz wrote and then went on to direct Lebanon, a film based on his horrific experiences inside that tank in 1982.

The result is a compelling and highly personal movie that was acclaimed by the critics when it was released theatrically earlier this year, has won a clutch of awards including the Golden Lion at the 2009 Venice Film Festival and which is to be released on DVD by Metrodome on 28th August 2010.

In Lebanon the movie, Shmuel is the tank's gunner, Assi the commander, Herzl the loader and Yigal the driver - four boys aged 20 plus who operate a huge and ferocious killing machine. They are dispatched to search a hostile town that has already been bombed by the Israeli Air Force but what seems on the face of it to be a simple and straightforward mission gets gradually out of control, eventually becoming a hellish nightmare as their tank becomes a potential death trap.

These boys are not fighters eager for battle, conquest or self-sacrifice. They're brave kids losing their innocence in the most brutal way possible while being mentally destroyed. A raw basic instinct will push them to the limits as they struggle hard to survive in a situation they cannot contain anymore while at the same time desperately trying not to lose their humanity amid the chaos of war. Lebanon is an intense, explosive, exhilarating and ultimately redemptive film about survival against the most overwhelming odds in which the conflict between their basic instincts to stay alive and their human conscience inevitably claims its victims.