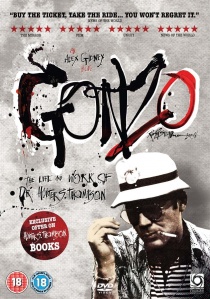 NewsComedy
News Article Go back to homepage
Gonzo, released by Optimum Home Entertainment on 13th April 2009, is directed by Alex Gibney. While Gibney shaped the screen story, every narrated word in the film springs from the typewriters of Thompson himself. Those words are given life by Johnny Depp, the actor who once shadowed Thompson's every move for the screen version of Fear and Loathing in Las Vegas.
Gilleon Smith, Victor Ortiz, David Carlo, Joe Cairo, Johnny Depp, Hunter S. Thompson
Alex Gibney
Mark Cuban, Lisa Cohen, Graydon Carter, Roy Ackerman
Optimum Home Entertainment
Unknown
13/04/2009
Thank you for supporting DVD365.net when you order using the link(s) below. As an Amazon Associate we earn from qualifying purchases
Buy DVD
Information

Gonzo, released by Optimum Home Entertainment on 13th April 2009, is directed by Alex Gibney, the director of the Academy Award winning documentary, Taxi to the Dark Side and Academy Award nominated Enron: the Smartest Guys in the Room. While Gibney shaped the screen story, every narrated word in the film springs from the typewriters of Thompson himself. Those words are given life by Johnny Depp, the actor who once shadowed Thompson's every move for the screen version of Fear and Loathing in Las Vegas.

Hunter S Thompson was renowned for his idealistic political convictions and savage pursuit of the American Way and the signature of the film is its particular focus on his most provocative and productive period from 1965 to 1975. This includes Hunter's encounters with the Hell's Angels, the Fear And Loathing on The Campaign Trail '72 era when Hunter focused on the Democratic Party's primaries (as incumbent Nixon did little campaigning) and his work for Rolling Stone magazine.

As well as Depp's narration, the film features hilarious, illuminating, and poignant contributions from both those that loved Hunter and those that sparred with him, including the legendary Ralph Steadman, Rolling Stone editor Jann Wenner, Hell's Angel Sonny Barger, George McGovern, Pat Buchanan, Jimmy Buffet and Jimmy Carter. According to Kris Kristofferson, Thompson was a "walking contradiction, partly truth, mostly fiction." A die-hard member of the NRA, he was also a coke-snorting, whiskey-swilling, acid-eating fiend. Gonzo is the definitive film biography of a mythic American figure.

HotDVDBDDIGITAL
With stunning revelations, glamorous journeys, and the arrival of the Jazz Age, Downton Abbey: A New Era, released on DVD and Blu-ray 15th August 2022 from Warner Home Video, will be the Crawleys' biggest adventure yet as they grapple with their future and new intrigue about ... END_OF_DOCUMENT_TOKEN_TO_BE_REPLACED
Top PicksView