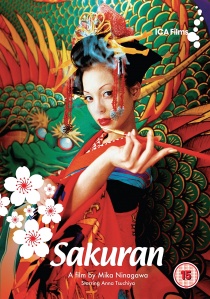 Adapted from the Manga comic series by Moyoco Anno, Sakuran is a tour de force of new Japanese film and music talent. A lush, sumptuous tale of 18th century Edo-era courtesans, with sassy geishas, illicit affairs, behind the scenes cat fights and all out brawls, this is the film Memoirs of a Geisha should have been.

The story follows the ascent of Kiyoha, a rebellious and feisty girl sold to a brothel in the notorious Yoshiwara district; a nightlife zone that served both the elite and working classes for hundreds of years. We follow her as she rises through the ranks of the competitive brothel, initially as the house girl of an established Geisha, through to learning the trade and eventually becoming Higurashi - the preeminent geisha of the brothel. Headstrong and independent from the outset, Kiyoha is choosy about her customers and defiant to her employers and fellow Geishas; she wants to find her own freedom rather than have a rich merchant buy it for her.

In the role of Kiyoha/Higurashi is half-Caucasian, half-Japanese model/rock idol/actress Anna Tsuchiya (Kamikaze Girls), whose natural energy and bad-girl approach is a perfect fit for the ferocious independence of Kiyoha. Delicately feminine she has a steely inner strength that has made her a huge hit with fans of both sexes. The director, acclaimed photographer Mika Ninagawa, brings her distinctive view on the world with lush, saturated colour and flamboyant costumes, veering away from historical accuracy to give a cheeky, j-pop twist to the geisha genre. With a soundtrack of pop, jazz and electro written and composed especially for the film by Ringo Shena, Sakuran is a riot of colour, sound and emotion - unlike anything you have seen before.

The anti-Memoirs of a Geisha, Sakuran is released on DVD on 12th January 2009 by ICA Films. A feast for the eyes and the ears this film excels as a warm-hearted and original tale of one woman snarling, biting and kicking her way to the top.

HotDVDBDUHD
An action thriller unlike any other, a young getaway driver relies on the beat of his personal soundtrack to be the best in the game in Baby Driver, the newest explosion of genre-crossing excitement from writer-director Edgar Wright, released on 4K Ultra HD, Blu-ray and DVD ... END_OF_DOCUMENT_TOKEN_TO_BE_REPLACED
Top PicksView