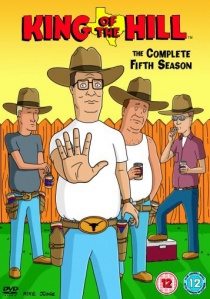 The fifth season of King of the Hill chronicles another momentous year for everyone's favourite redneck family, The Hills! Join Hank, Peggy, Bobby and the other residents of Arlen with your copy of King of the Hill Season 5 on DVD. This Emmy Award® winning show is released to buy as a four disc box-set on 26th February 2007, proudly presented to you by Twentieth Century Fox Home Entertainment, the studio that brought you Futurama and The Simpsons.

Hank Hill (Mike Judge) is facing trying times this season. His presidential candidate of choice, George W. Bush, has a limp handshake, his wife and son prefer barbecuing with charcoal over his precious propane, and his new co-worker from Oklahoma has taken up some illegal after-hours employment on a street corner! However, in true King of the Hill style, we can always count on Hank to do the right thing by his town, his friends, his family and his country.

Bobby Hill (Pamela Adlon), turns the momentous age of 13 in Season 5. He becomes the school mascot and demonstrates his maturity by saving the life of a drowning pig at the country fair. Hank's niece Luanne (Brittany Murphy, Happy Feet) shows less great judgement when she decides to vote communist because she likes the candidate's red tie, and Peggy allows her ambitious nature to get the best of her when she and Minh (Lauren Tom, Futurama) compete to see who can donate the most blood.

King of the Hill: Season 5 includes a spectacular array of special guest stars including Brendan Fraser (The Mummy), Renee Zellweger (Bridget Jones's Diary), Snoop Dogg (Starsky & Hutch), Owen Wilson (Night At The Museum) and rock group No Doubt. Keep the misadventures of the Hills in your life for years to come with King of the Hill Season 5 on DVD this February!

BD
Based on the global blockbuster videogame franchise from Sega, Sonic The Hedgehog, released on DVD, Blu-ray and 4K UHD from 8th June 2020 from Paramount Home Entertainment, tells the story of the ... END_OF_DOCUMENT_TOKEN_TO_BE_REPLACED
Hot PicksView