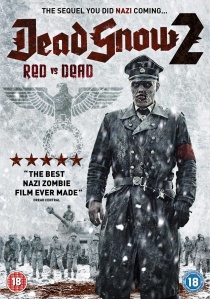 It's the sequel you did Nazi coming. General Herzog and his horde of undead fascists are back and more blood-thirsty than ever in one of the best horror sequels ever made. Having survived the ordeals of Dead Snow, our hero Martin wakes to find himself imprisoned in the town that is next on Herzog's hit-list. With a bigger budget and even more explosive action, hang on to your helmets for one of the biggest and funniest thrill rides of the year.

Dead Snow 2: Red vs. Dead will be available on Blu-ray & DVD on 12th January 2015 courtesy of Entertainment One, with the Dead Snow 1 & 2 film collection also available on DVD.

Having crashed his car after fleeing the ski lodge where his friends were brutally murdered by General Herzog and his squadron of Nazi zombies, Martin wakes up in hospital attempting to convince the local authorities that he is not responsible for their deaths.

Little do they know the undead fascists are very much still 'living' and marching on the town and what's worse, they have a tank! With time running out it's up to Martin and his new American allies to save the town from total annihilation and defeat Herzog and his men once and for all.

HotUHD
Now more stunning than ever before, return to the stunning locations and epic adventures in Peter Jackson's Middle-earth in The Lord of the Rings Trilogy, arriving on stunning 4K UHD 30th November 2020 from Warner Home Video. END_OF_DOCUMENT_TOKEN_TO_BE_REPLACED
Top PicksView