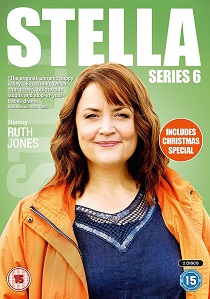 It's back to the Welsh Valleys for one last time and the final series of Stella - Sky 1's hugely popular comedy drama - is released on DVD 6th November 2017 from 2entertain.

With Ben heading off to Uni, Stella and Michael are left literally holding the baby and learning to be new parents all over again. But a closely kept secret of Stella's soon threatens to break up their happy family, leaving them wondering if life can ever be the same.

Still grieving after the death of Rob, good fortune finally smiles on Luke and his family when they receive some life-changing news - though of course, it doesn't come without a price. Aunty Brenda's mother Olwen is about to turn 100 and Ken returns from Tenerife to help his sister organize a big birthday bash. But in the process, Aunty Brenda uncovers a family secret of her own and a confrontation with Olwen has dire consequences. Nadine is looking for meaning in life and finds it in an unexpected quarter as she embarks on a new matchmaking business with Bobby.And a stranger from Rob's past arrives in town upsetting the family apple cart in more ways than one!

Join us for this final bitter sweet trip to Pontyberry, as we bid farewell to Stella and the family and friends we've so grown to know and love.