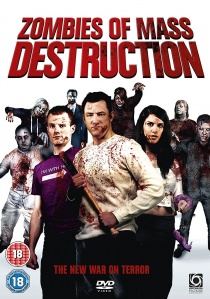 An idyllic island town is under attack by that most invasive of pests: zombies! Port Gamble is being overrun with braineaters, and the people seem powerless to stave them off. But wait, a rag tag band of rebels is trying to turn the tide and push the invading hoards of undead back. It sounds familiar, sure, but this time stereotypes are on parade (and parody) in a retake on the zombie thriller.

We have the full compliment of cinematic shorthand, including the closeted small town boy who has gone to the city and returns with his pushy boyfriend in tow; the angry, hard-working, heavy-accented, immigrant from a Muslim country who is overprotective of his beautiful daughter; the hippie peacenik environmentalist; the fire and brimstone reverend who hates everything you'd expect him to, and many more.

Enter the zombies. Gore abounds and the current events-based hits keep coming in this send-up of zombie movie clichés where no subculture escapes unscathed.