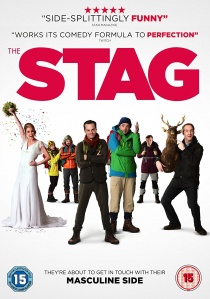 Written and directed by John Butler, Andrew Scott and Hugh O'Conor star in the Irish comedy The Stag, released on DVD and Blu-ray by Arrow Films on 21st July 2014.

Self-confessed metrosexual Fionnan doesn't want a stag do, but would happily attend the Hen. Ruth, the now concerned bride-to-be (Amy Huberman), promptly persuades the, marginally more-macho, best man (Andrew Scott) to organise one. Reluctantly, he agrees but proceeds to do everything he can to stop Ruth's wildly infamous brother, known only as The Machine (Peter McDonald), coming along for their sober, walking-weekend, excuse for a stag party. But The Machine, not so easily foxed, tracks them down, and what follows is a hilarious few days in rural Ireland where the Stags find themselves lost, shot at, stoned and butt-naked.

The Stag is a hilarious and heart-warming journey of friendship, fear, male bonding, and tightly fashioned squirrel skin!

DVD
The world's most lethal odd couple - bodyguard Michael Bryce and hitman Darius Kincaid - are back on another life-threatening mission as The Hitman's Wife's Bodyguard arrives on DVD, Blu-ray and 4K ... END_OF_DOCUMENT_TOKEN_TO_BE_REPLACED
Top PicksView