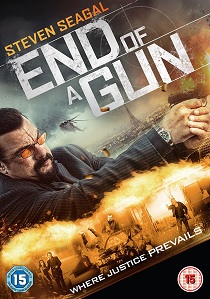 Legendary action superstar Steven Seagal (Under Siege, Above The Law) stars as a mall cop you wouldn't want to mess with, in a lean and mean thriller that sees him going up against a drugs kingpin in a non-stop barrage of shootouts, car chases and jaw-dropping action delivered only the way 'The Master of Aikido' can!

When Decker, a highly skilled ex-DEA agent, crosses paths with Lisa (Jade Ewen), she approaches him with a seductive proposition: help her steal two million dollars from a drug kingpin's car, guarded by Parisian Police, and share in the bounty. But, even if they outrun the cops, can they outgun the hit squads sent by the furious, sadistic drug lord to reclaim the loot?

End Of A Gun, released on DVD 10th July 2017 from Kaleidoscope Home Entertainment, is a high-stakes thriller, proving when games begin, there's only one way it ends...

DVD
Two lifelong friends find themselves at an impasse when one abruptly ends their relationship, with alarming consequences for both of them in The Banshees Of Inisherin, released on DVD and Blu-ray 30th January 2023 from Walt ... END_OF_DOCUMENT_TOKEN_TO_BE_REPLACED
Top PicksView