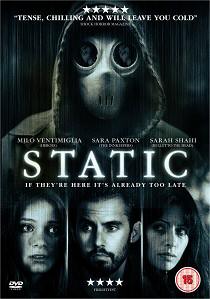 Milo Ventimiglia and Sara Paxton star in the critically acclaimed creepy horror Static which makes its debut on DVD thanks to Second Sight Films.

A young writer (Ventimiglia - Heroes, Rocky Balboa) and his wife (Sarah Shahi - Life) are struggling with the loss of their child but just as they are trying to get their lives back on track a hysterical young woman (Paxton - The Innkeepers, Last House on the Left), turns up at their secluded house in the middle of the night, claiming she is being chased by mysterious masked men. Letting her stay the night the couple are soon drawn into the horror when the unknown force starts to stalk them, a terrifying game of cat and mouse ensues, resulting in a shocking conclusion and one of the most chilling film finales of recent years.

Static is written and directed by Todd Levin in his first feature and will be premiering in the UK on DVD on 15th July 2013.

This ominous chiller will have you gripped to its astounding finish.