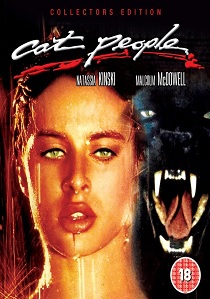 Irena (Nastassja Kinski - Tess) is a beautiful young woman who shares a terrifying secret with her brother (Malcolm McDowell - A Clockwork Orange) - when sexually aroused she transforms into a panther.

When Irena falls in love for the first time, her secret threatens the relationship. Can she bring herself to tell her new-found love that she is one of the Cat People?

The director Paul Schrader, a long time Martin Scorsese collaborator (Taxi Driver, Raging Bull, The Last Temptation Of Christ) & director of, amongst others, American Gigolo, brought a similar kind of sexual chic to this explicit horror movie. A remake of the beautiful, haunting 1942 Cat People, this version takes off from the same idea: that a woman, Irena, a member of a race of feline humans, will revert to her animalistic self when she has sex.

Arriving to meet her brother in New Orleans, she finds herself disturbed by his sexual presence. A zoo curator (John Heard) becomes fascinated by her, but he will discover that her kittenish ways are just the tip of the claw.

Schrader dresses the story up in a stylish, glossy production, keyed on Kinski's green-eyed, thick-lipped beauty; it's hard to think of another actress who could so immediately suggest a cat walking on two legs.

Luckily Kinski had a European attitude toward her body, because this film has plenty of poster-art nudity. There's also lots of gore and some wacky flashbacks to the ancient tribe of cat people, who hold rituals in an orange desert while Giorgio Moroder's music plays. 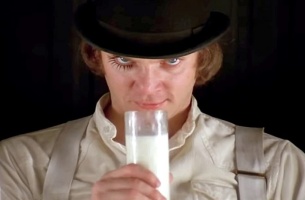