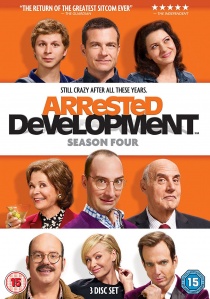 Following the story of the wildly eccentric and entertainingly dysfunctional Bluth family who were once wealthy before losing everything, Arrested Development explores the life of the one son who had no choice but to keep them all together.

Focusing on a different character for each episode in this sensational new season, the Bluth family finds itself in economic ruin after the astonishing sequence of events in season three, forcing Michael Bluth (Jason Bateman: Identity Thief, Horrible Bosses) to move in with George-Michael (Michael Cera: Juno, Superbad) at UC Irvine. The family fragments entirely when Tobias Fünke (David Cross: Eternal Sunshine of the Spotless Mind, Men in Black) reels from suspicions on his sexuality, while former partner Lindsay Bluth Fünke (Portia de Rossi: Ally McBeal, Cursed) gallivants off on a spiritual trip to India.

Boasting fifteen episodes in this magnificent new season, Arrested Development: Season Four will leave you captivated with an uproarious selection of extras, featurettes and deleted scenes. Acquire an insight into the complexities of making the hugely popular series with the documentary "The History of Arrested Development" and enjoy 17 fascinating extras featuring cast interviews and behind-the-scenes featurettes.