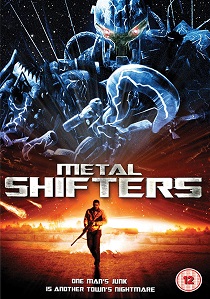 It travelled millions of light years through space before colliding with a Soviet satellite and crashing into rural Redeemer, Idaho. Now an alien bacterium that transforms steel objects into furious killing machines has infected the local scrapyard. Directed by Paul Ziller, Metal Shifters is released on DVD by Anchor Bay Entertainment on 2nd April 2012.

Can a local contractor (Kavan Smith of Stargate: Atlantis and The 4400) and his estranged ex-girlfriend (Nicole de Boer of Star Trek: Deep Space Nine and Cube) find a way to stop a heavy metal monster from tearing a path of biological and mechanical destruction through small-town America?

UHD
Tom Hardy returns as the lethal protector Venom, one of Marvel's greatest and most complex characters in Venom: Let There Be Carnage, available on 4K Ultra HD, Blu-ray and DVD on 3rd January 2022 from Sony Pictures Home ... END_OF_DOCUMENT_TOKEN_TO_BE_REPLACED
Top PicksView