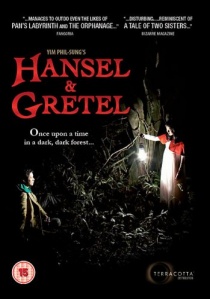 Nominated for Best Film at the 2008 Sitges International Fantasy Film Festival Hansel And Gretel, released on DVD by Terracotta Distribution on 6th April 2009, is a visually stunning and truly affecting fable about the destruction of childhood dreams, the loss of innocence and the power of the imagination to overcome life's horrors.

Thematically and tonally comparable to Guillermo del Toro's Pan's Labyrinth, Juan Antonio Bayona's The Orphanage and the works of author Angela Carter (The Company Of Wolves), Hansel And Gretel, the latest feature from South Korean writer-director Yim Phil-Sung (Antarctic Journal), takes its initial inspiration from the classic Brothers Grimm story and effectively employs it as the basis to reinvent the fairy tale as a dark and chimerical adult mystery for the modern age.

Driving down a country road en route to visit his ailing mother, father-to-be Eun-soo (Chun Jeong-myoung) is talking to his expectant girlfriend on his mobile phone when he loses control of the car and crashes. He awakens to find himself lost in a thick forest, where he meets a pre-teen girl, Young-hee (Shim Eun-kyoung), who beckons him to follow her. Young-hee leads Eun-soo to a picturesque house situated deep in the forest, where she introduces him to her parents and her two siblings, winsome younger sister Jung-soon (Jin Ji-hee) and sullen adolescent brother Man-bok (Eun Won-jae).

The house is a wonder of bright colours, kitsch décor, toys and confectionery but lacks a working telephone and a mobile network signal. After gratefully accepting the family's hospitality for the night, the next morning Eun-soo sets off to find his car but once again becomes lost in the forest, inevitably finding himself back at the house, where he is forced to spend a second night. Come daybreak, Eun-soo finds a note from the parents informing him they have left on urgent business and requesting that he look after the children for a couple of days.

This is merely the beginning of a week-long nightmare during which Eun-soo gradually learns the truth about the strange children in his care, the fates of other adults who have stumbled across the house, and the existence of a hand drawn story book that seems to predict his own future. A dark and gripping fairy tale for adults, Hansel And Gretel is also a feast for the eyes, boasting sumptuous production design by Ryu Seong-hee (The Host; Oldboy) and outstanding cinematography by Kim Ji-yong (Forbidden Quest; A Bittersweet Life).

HotDVDBDDIGITAL
Batman: The Long Halloween, Part Two, released on DVD and Blu-ray 9th August 2021 from Warner Home Video, continues as the Holiday Killer is still at large and, with Bruce Wayne under the spell of the venomous Poison Ivy, Batman is nowhere to be found. END_OF_DOCUMENT_TOKEN_TO_BE_REPLACED
Top PicksView