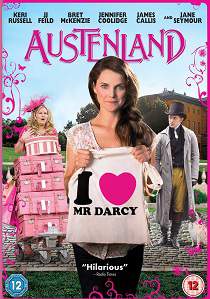 Based on the novel by New York Times best-selling author Shannon Hale, this Sony Pictures Classics film presents a modern twist on the timeless tales of Jane Austen's romance novels. The imaginative story focuses on a woman named Jane (Russell), who is obsessed with the Regency era and the famed author's fiction. Austenland premiered at the 2013 Sundance Film Festival and not only celebrates Austen, but also reminds us of her iconic work in the year (2013) that marked the 200th anniversary of her first publication of Pride and Prejudice.

Austenland is directed by Jerusha Hess from a screenplay by Hess and Shannon Hale, and based on Hale's novel. It is produced by Stephenie Meyer, Gina Mingacci and Meghan Hibbett and executive produced by Dan Levinson and Robert Fernandez.

Jane Hayes's (Keri Russell) adoration of all things Jane Austen is complicating her love life. Determined to be the heroine of her own story, Jane spends her life savings on a trip to Austenland, an eccentric resort where guests experience complete immersion in the Regency era. Armed with her bonnet, corset and needlepoint, Jane strives to avoid spinsterhood . but has a difficult time determining where fantasy ends and real life-and maybe even love-begins. Jennifer Coolidge (Legally Blonde) and Jane Seymour (Wedding Crashers) also star in this charming romantic comedy.

HotDVDBDTV
DCI Tom Brannick returns, as the murder of a crooked accountant unravels a trail of greed that threatens to expose the true identity of the legendary assassin, codenamed, Goliath in Bloodlands: Series 2 released on DVD and Blu-ray 14th November 2022 from Dazzler Media. END_OF_DOCUMENT_TOKEN_TO_BE_REPLACED
Top PicksView