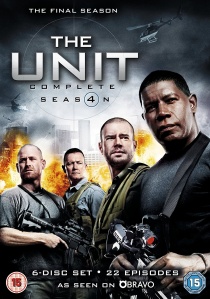 The Unit deploys for a fourth and final time, with an explosive closing salvo of global undercover missions and hard edged excitement. Starring Dennis Haysbert (24, Goodbye Bafana) and Golden Globe© Award winner Regina Taylor (I'll Fly Away), The Unit: Season 4 is available to own on DVD on 8th February 2010 from Twentieth Century Fox Home Entertainment.

Based on show producer Eric Hanley's book, Inside Delta Force, The Unit is a tensely realistic US action drama about a highly skilled, secret contingent of special-forces soldiers operating outside the traditional chain of military command, and risking their lives on perilous undercover missions. Their tight-knit families keep the home fires burning, and more importantly, fiercely guard their loved one's secrets. If members of The Unit are killed or captured, both the army and the US government can and will deny the organisation's very existence - these are heroes who will always remain unsung.

In the final season, the hunters become the hunted as the team and their families are targeted by a deadly and far-reaching conspiracy, forcing them to relocate and assume new identities. The Unit is also joined by their first female agent, Nicole Steinwell (Dawson's Creek) who goes all-out to prove that she's more than just a pretty face.

Every episode of The Unit: Season 4 delivers edge-of-the-seat action, and while longtime fans will be delighted as the finale ties up loose ends, it's best to expect the unexpected... like all good tales there's a hard-hitting twist in this one!