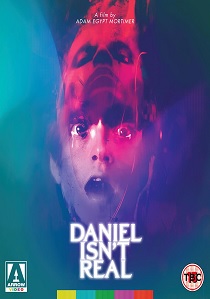 Luke Nightingale, a lonely young boy with an emotionally unstable mother, invents a friend named Daniel who leads them both into a world of fantasy and imagination. After Daniel tricks Luke into doing something terrible, Luke is forced to banish him to the bottom of his subconscious.

Featuring star-making turns from a young cast, and co-starring Sasha Lane (American Honey) and Mary Stuart Masterson (Skin), Daniel Isn't Real is a visually stunning, thought-provoking exploration of mental illness, entitlement and childhood trauma, perfectly tailored for our troubled times, and one of the most unique and captivating independent horror movies of recent years.