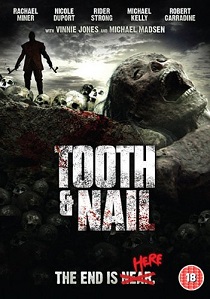 The year is 2012 and the world's gasoline supplies have finally run dry, initiating panic-fuelled anarchy and a total breakdown of civilization. In an abandoned hospital on the outskirts of Philadelphia, a small group of survivors of the ensuing chaos have taken refuge, hoping one day to rebuild some semblance of a society. While searching the nearby streets for any supplies they can find, they discover a badly beaten girl (Miner) and take her back to the hospital to look after her.

It is only later that they discover they have been followed by a savage band of cannibals known as Rovers, led by the sadistic Jackal (Madsen). Each day, the Rovers launch an assault on the hospital, taking out the still-civilized survivors one by one in order to maintain a steady supply of fresh human meat. As their numbers begin to dwindle rapidly, those will some sense of humanity left are forced to make a choice between running and hiding or standing their ground and fighting tooth and nail.