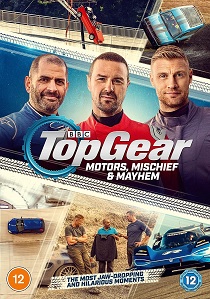 And it's that willingness this DVD celebrates, as it brings together some of the very best bits from Chris, Freddie and Paddy's Top Gear tenure so far. And by 'best bits' of course we mean 'most painful bits'.

Wince as the boys tackle a house-high Wall Of Death in their insurance write-offs. Sweat as they endure the broiling heat of Ethiopia in their first cars. Cover your eyes as Freddie bungee-jumps a Rover Metro off a massive dam. Feel slightly sorry as Chris gets pelted with golf balls while wearing a dinosaur costume.

All that, plus Top Gear's epic race between a McLaren Speedtail and fighter jet, a tribute to Colin McRae, a whole load of electric shocks, and all the very best crashes from the last few series. Because, let's be honest, there were plenty to choose from...

3D-BD
The surviving members of the resistance face the First Order once again, and the legendary conflict between the Jedi and the Sith reaches its peak as Star Wars: The Rise of Skywalker is released on ... END_OF_DOCUMENT_TOKEN_TO_BE_REPLACED
Hot PicksView