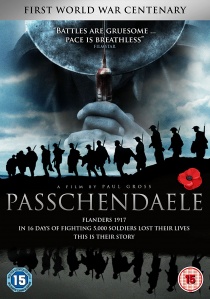 NewsTV SeriesHorrorDramaRomance
News Article Go back to homepage
Passchendaele, the multi-award winning Canadian movie made in honour of the country's 16,000 soldiers who were killed or wounded in one of the bloodiest and most horrific conflicts of World War 1, will be released on retail DVD and Blu-ray by High Fliers on 25th January 2010.
Landon Liboiron, Rainer Kahl, Jesse Frechette, James Kot, Michael Greyeyes, Paul Gross
Paul Gross
Paul Gross, Niv Fichman, Francis Damberger, Janina Barrett
High Fliers
1 hour 54 minutes
25/01/2010
Thank you for supporting DVD365.net when you order using the link(s) below. As an Amazon Associate we earn from qualifying purchases
Buy DVD
Buy BD
Information

Passchendaele, the multi-award winning Canadian movie made in honour of the country's 16,000 soldiers who were killed or wounded in one of the bloodiest and most horrific conflicts of World War 1, will be released on retail DVD and Blu-ray by High Fliers on 25th January 2010.

Directed and written by Paul Gross, Passchendaele took nearly $850,000 from over 200 screens in its opening weekend when it was released theatrically in Canada last year. It went on to hit a final box office total of nearly $5 million which earned it a Golden Reel Award for being the highest-grossing Canadian film of 2008.

At this year's Academy of Canadian Cinema and Television Genie Awards, announced in April, the film was also voted Best Picture and won prizes in the Art Direction, Costume, Sound and Editing categories.

The battle of Passchendaele, named after the village in Belgium where it was fought, became synonymous with the appalling conditions troops had to endure in World War 1 trench warfare but for decades the Canadian government and media tried to suppress the true horror of the conflict. Now, the record can be finally set straight as the film reveals for the first time the incredible heroics and bravery of the soldiers who fought in the battle. However, Passchendaele is far more than just an epic war movie. Intertwined with the carnage and horrors of the battle, a dramatic and compelling love story is being played out back in Calgary. As well as writing and directing, Paul Gross also stars as shell-shocked and badly wounded Sergeant Michael Dunne who is shipped back home and falls for Sarah Mann (Caroline Dhavernas), the nurse who helps him recuperate.

Declared medically unfit for the front line, he joins a local recruiting office and encounters Sarah's asthmatic younger brother David (Joe Dinicol) who is unable to sign-up because of his condition. However, desperate to prove his worth, he uses a fraudulent medical certificate to enlist and is posted to Passchendaele.

Michael has no choice but to follow David back there and try as best he can to ensure that he survives. The pair are re-united but during a heavy German artillery attack Michael helps a wounded soldier to a field hospital where he is astonished to find Sarah who has enlisted as a nurse again.

David goes missing and while Michael is searching desperately for him, a hush descends over the troops as all eyes are trained across the hell of No-Man's Land to the front of the German line. A makeshift wooden cross has been erected ... and lashed to it is badly wounded David.