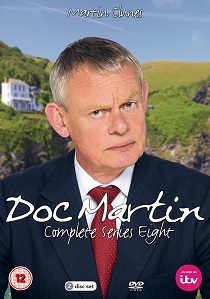 Set in the idyllic, sleepy hamlet of Portwenn in Cornwall, Dr. Martin Ellingham (Clunes - Men Behaving Badly), the town's sole GP with a brusque bedside manner and a phobia of blood, returns for eight new episodes of the ratings winning drama, as he continues to challenge the community, his wife and even their dog Buddy. Doc Martin: Complete Series Eight arrives on DVD as a two-disc set, complete with more than 80 minutes of special features, on 13th November 2017.

Martin and Louisa are finally on an even keel, in spite of, rather than because of their couples' therapy and are living together again at the surgery with their son James. The village is abuzz with the excitement of the pending nuptials of Penhale and Janice, but when the groom is taken ill suddenly there's a chance he might not make it down the aisle and on top of that there's a mystery outbreak with guests collapsing left right and centre. Can the doc save the day?

On top of the myriad of illnesses amongst the locals, there's upheaval on the home front; when Louisa starts to consider a career change its unwelcome news to the doc, who doesn't like change of any kind - even if it could be for the better. Finding new day care arrangements for James is also proving difficult with Martin upsetting a nursery manager and the baby's teething is driving everyone to distraction with the lack of sleep, but a suggested cure leads to an unwelcome outcome.

When the Doctor's blood phobia, causes him to pass out during a procedure, his patient makes a formal complaint, could it mean the end of his career?

It's time to make an appointment with Doc Martin, you're guaranteed to be entertained. 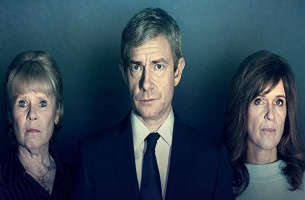