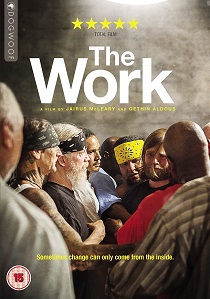 California's notorious Folsom Prison - immortalised by Johnny Cash - houses some of the toughest inmates in the US prison system. But it has also become the site of a groundbreaking experiment that offers its prisoners a sense of hope - and helps those from the outside world make sense of their lives too.

This unique four-day group therapy session is charted in The Work, a remarkable film that looks in on prisoners and civilians going through an intense session that is as mentally tough as Folsom is physically brutal. And as vicious and merciless as this world is, the sessions offer prisoners and those from outside the walls a chance at rehabilitation, redemption and saviour.

Wowing audiences at this year's Sheffield Doc/Fest and earning the prestigious Audience Award, following its Jury Prize win at SXSW 2017, The Work is an unforgettable documentary that will leave viewers moved and shaken in equal measure. Purely observational, McLeary goes inside Folsom Prison to document a four-day group therapy session between inmates and men from the outside. The result is a raw an intimate account of redemption and rehabilitation.

HotDVDBD
An impending apocalypse raises the stakes and shatters the boundaries of time and space in Marvel's Agents of S.H.I.E.L.D. - The Complete Fifth Season, arriving on DVD and Blu-ray 1st October 2018 from Walt Disney Home Entertainment. END_OF_DOCUMENT_TOKEN_TO_BE_REPLACED
Top PicksView