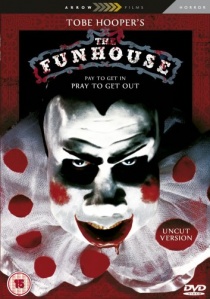 The word 'classic' is certainly one that is overused, especially in respect to cinema, but in the case of Tobe Hooper's memorable teen-slasher, The Funhouse, the term is definitely justified. Unavailable in the UK on any format for many years (the film was briefly banned on video when it was mistakenly branded a 'video nasty'), Hooper's little seen but highly regarded shocker finally comes to DVD on 29th October 2007 from Arrow Films.

Reportedly the project that was responsible for Hooper having to turn down directing duties on E.T.: The Extra-Terrestrial, The Funhouse is that rarest of cinematic treats - a genuinely fun and creepy horror film. From its inspired opening sequence that pays homage to both Psycho and Halloween in the same breath, to an excellent cast that includes Elizabeth Berridge (Amadeus), Shawn Carson (Something Wicked This Way Comes), Miles Chapin (The People Vs. Larry Flynt; Howard The Duck) and Wayne Doba (Scarface; Almost Famous; Monkeybone), along with cult favourites William Finley (Phantom Of The Paradise; The Fury; The Black Dahlia) and two-time Oscar nominee Sylvia Miles (Farewell My Lovely; Midnight Cowboy), and special make design by six-time Oscar winner Rick Baker (An American Werewolf In London), The Funhouse is an unmissable delight for horror fans.

A reworking of the 'old dark house' story, the film's premise is simple but effective. After an evening having fun at a travelling carnival, two teenage couples on a double date decide to spend the night hidden inside the funhouse amongst the fake goblins, skeletons and monsters. But the hi-jinks soon turn into a living nightmare when they witness the murder of the carnival's fortune-teller, Madame Zena (Miles) at the hands of the showground barker's freakish son, Gunther (Doba), and find themselves being stalked by a grotesque creature more terrifying than anything the funhouse itself has to offer.

Convincing performances, stylish camerawork, superb set designs and slick direction all add to the overall creepy atmosphere in a film that delivers its fair share of shocks and thrills. Poltergeist notwithstanding, The Funhouse is arguably Tobe Hooper's most accomplished feature to date and remains as entertaining today as it was when it was first released.