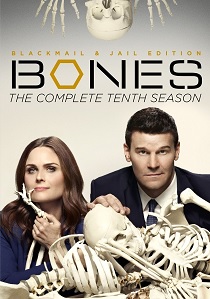 This season sees the devastating loss of one of the team's own, and those left behind struggling to unravel a sinister conspiracy to frame Booth and send him to prison. Hodgins has his own problems when he becomes a murder suspect at a forensic scientist convention, and Aubrey is troubled by an emotional connection to the case of a murdered hedge-fund trader.

With more unnerving mysteries to solve, from discovering the body of a yoga instructor who was an ex-biker gang member, to a finding a psychic's body in a tree, the team have more on their hands than ever before. Bones: The Complete Tenth Season also includes a special 200th episode special tribute to icon Alfred Hitchcock.

Settle down to more action, drama and suspense with Bones: The Complete Tenth Season on DVD this October.