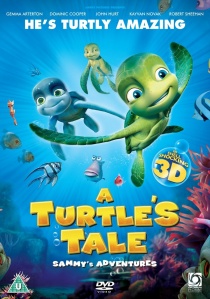 Released by Optimum Home Entertainment on DVD and Blu-Ray on 18th July 2011, A Turtle's Tale: Sammy's Adventures 3D is an epic global adventure story, an animated family feature made spectacularly real by the latest in 3D technology.

A young sea-turtle's romantic quest for his first, lost love, a fellow hatchling, born on the same Californian beach, takes him on a marathon voyage across the seven seas, to the furthest corners of the earth. In a world under increasing threat from environmental pollution, where the oceans are a battleground between the forces of nature and mankind, can Sammy the sea-turtle complete his dangerous 50-year mission and find his soul mate Shelly and the happiness they deserve?

The thrills and comical spills are brought to the screen by director Ben Stassen (Fly Me To The Moon) with the help of a top-class British voice cast, starring Dominic Cooper (An Education, Mamma Mia), Gemma Arterton (St Trinian's, Clash of The Titans, Prince of Persia), John Hurt (Harry Potter and the Deathly Hallows), Kayvan Novak (Four Lions, Fonejacker, Facejacker) and Robert Sheehan (Misfits, Season of the Witch).