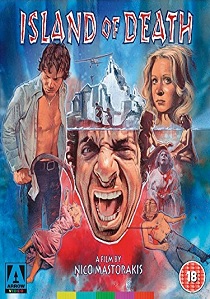 NewsHorrorThriller
News Article Go back to homepage
From cult director Nico Mastorakis, Island of Death, released as a dual-format DVD and Blu-ray courtesy of Arrow Video on 25th May 2015, is a travelogue of atrocities with scenes so strong that the British Government was once compelled to ban it as a video nasty.
Ray Richardson, Jannice McConnell, Gerard Gonalons, Jessica Dublin, Jane Lyle, Robert Behling
Nico Mastorakis
Nestoras Pavelas, Nico Mastorakis
Arrow Video
1 hour 48 minutes
25/05/2015
#IslandOfDeath
Thank you for supporting DVD365.net when you order using the link(s) below. As an Amazon Associate we earn from qualifying purchases
Buy DVD
Buy BD
Information

Welcome to Mykonos, the holiday destination of choice for sun, sea and slaughter! From cult director Nico Mastorakis, Island of Death, released as a dual-format DVD and Blu-ray courtesy of Arrow Video on 25th May 2015, is a travelogue of atrocities with scenes so strong that the British Government was once compelled to ban it as a video nasty.

Arriving on the idyllic Greek island, Christopher and Celia appear to be every inch the perfect, handsome young couple. Little do the welcoming locals realise that they are in fact a pair of murderous degenerates, determined to spread their own particular brand of perversion across the island. DIY crucifixions, opportunistic bestiality, sexual peeing and murder by all conceivable forms ensue including death by makeshift blowtorch, samurai sword, dump truck and more!

Shocking, brutal and totally politically incorrect in its outlook, Island of Death is a gruelling cinematic experience devised by director Mastorakis to out-do the excesses of The Texas Chain Saw Massacre, which he was hugely inspired by. Now fully uncut and newly-restored from the original negative, fans can enjoy Island of Death in all its sleazy, lurid glory.