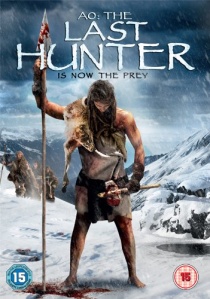 Acclaimed French director Jacques Malaterre makes his feature film debut with AO - The Last Hunter, an epic prehistoric adventure about Neanderthal man's fight for survival which is being released on retail DVD by High Fliers on 23rd July 2012.

The movie is set 30,000 years ago when the Neanderthals were a dying species and Homo Sapiens had started colonising the Earth and is an adaptation of Marc Klapczynski's best selling novel AO L'homme Ancient.

Simon Paul Sutton stars as AO, a desperate Neanderthal who lives in harmony with nature but who one day witnesses the shocking massacre of his wife and baby girl Nea and the rest of his clan. Anxious to find any surviving members of his family and in particular his twin brother from whom he was separated when he was just nine, he decides to leave Northern Europe where he had made his home and travel to his birthplace in the South.

On his way he is rejected by groups of Homo Sapiens due to his ape-like features and colossal strength but meets the beautiful Aki (Aruna Shields) who has been imprisoned by her tribe. She is one of the few Homo Sapiens to accept and love him for what he is and they embark on a passionate relationship. However AO must first fight for his survival as he battles with terrifying animals from a lost world. He also has to face up to his biggest danger of all - the Hyena-Men who are a particularly vicious clan of Homo Sapiens that are determined to exterminate AO and his species.

Commented Jacques Malaterre: "Prehistory is an extraordinarily rich source. It brings us back to all kinds of questions about who we are today. The Neanderthal is a real movie hero. He was rough and ready, his fate was tragic . and then he disappeared".

DVD
Doctor Strange teams up with a mysterious teenage girl from his dreams who can travel across multiverses in Doctor Strange in the Multiverse of Madness, released on DVD, Blu-ray and 4K UHD 18th July 2022 from ... END_OF_DOCUMENT_TOKEN_TO_BE_REPLACED
Top PicksView