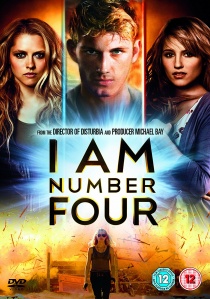 John Smith is no ordinary teen, he is Number Four. Join him as he tries to save himself and those around him in the action-packed thriller I Am Number Four whichhits shops on Blu-ray and DVD from 20th June 2011 from Walt Disney Studios Home Entertainment. With rising star Alex Pettyfer, Glee sensation Dianna Agron and Australian beauty Teresa Palmer, I Am Number Four is guaranteed to get pulses racing this summer.

From deleted scenes to commentary from Director DJ Caruso (Disturbia), I Am Number Four is full of exclusive bonus features; including a behind the scenes look at just what it took for Teresa Palmer to become the sexy, fierce and powerful 'Number Six'. From a gruelling regiment of sit ups and sword fight training, to being yanked 60 feet into the air by a crane, Teresa offers a rare, intimate look into how she became 'Number Six' and also reveals the secrets of what's yet to come for both her and the other Numbers still out there.

I Am Number Four is the story of an extraordinary young man, John Smith (Alex Pettyfer), who is a fugitive on the run from ruthless enemies sent to destroy him. Changing his identity, moving from town to town with his guardian Henri (Timothy Olyphant), John is always the new kid with no ties to his past. In the small Ohio town he now calls home, John encounters unexpected, life-changing events-his first love (Dianna Agron), powerful new abilities and a connection to the others who share his incredible destiny.

Join this exceptional group of teens as they struggle to outrun their past, discover their future and live a normal life on Earth as I Am Number Four is released on DVD and Blu-ray from 20th June 2011.

HotUHD
Now more stunning than ever before, return to the stunning locations and epic adventures in Peter Jackson's Middle-earth in The Lord of the Rings Trilogy, arriving on stunning 4K UHD 30th November 2020 from Warner Home Video. END_OF_DOCUMENT_TOKEN_TO_BE_REPLACED
Top PicksView