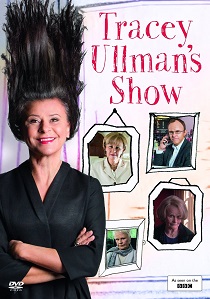 British comedy treasure Tracey Ullman (Three of a Kind) is back with a bang in the hilarious all-new character-driven comedy series, Tracey Ullman's Show, which comes to DVD courtesy of RLJ Entertainment's Acorn label following its run on BBC One.

After several decades of fame and acclaim in the US, Tracey returns to British television for her first UK sketch show in 30 years, with her unique take on some famous faces and some of the extraordinary characters who live in, or are visiting the global hub that is the UK.

Discover the secret life of shoplifter and hooligan Dame Judi Dench; Dame Maggie Smith's home-filmed auditions for blockbuster feature films; an inside look at the life of Germany's Angela Merkel; topless feminist MP Sally Preston; Hayley the obsessive zookeeper; Dominic, the coffee-shop app-conceiver and find out what happens when Camilla Parker Bowles and Carole Middleton take turns babysitting the smallest in line to the throne.

With many more entertaining characters, this side-splitting satirical series, created by and starring the tremendously talented and chameleon-like Tracey Ullman, and featuring guest appearances from Rupert Grint (Harry Potter), Steve Pemberton (The League of Gentlemen) and Michael Brandon (Episodes), will arrive on DVD on 22nd February 2016.

Step into an extraordinary day in the life of Britain with the laugh-out-loud Tracey Ullman's Show.